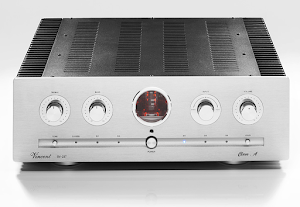 In their noble hifi components Vincent likes to marry off valves to transistors. Under the stern looks of a German designer the bond between glass bulbs and semiconductors in the brandnew SV-237 integrated amplifier wings our hope for a particularly successful relationship.

An aluminium frontplate of eight millimetres thickness, treble, bass, input and volume controls shimmering like silver, an illuminated bull’s eye that reveals a valve – judging by its visual appearance, the brandnew Vincent SV-237 looks already impressive. Outwardly it strongly reminds of its older brothers SV-236 and SV-236 Mk; due to its beefed-up inner qualities it’s meant to follow in the footsteps of Vincent’s hitherto most successful integrated amplifiers.

For the circuit layout, the component selection and greater power reserves at complex loads the Baden-based Sintron GmbH, Vincent’s supplier, hired a renowned specialist for analogue electronics. Among the references of the German designer, graduate engineer Frank Blöhbaum, one can find among others the Thorens TEM 3200 and TEP 3800 reference pre and power amps as well as an automatic bias point control in the large T.A.C. valve amplifiers. In the interview with i-fidelity.net he’s disclosing the sophisticated circuit tricks which he used to get the SV-237 on the reference track.

In view of so much technical fine-tuning the armada of RCA sockets with five line inputs, one pre out and one rec out rather had to stand back. For slaving in a subwoofer crossover a main input would be helpful. Looking at the valve, analogue freaks would have wished for a phono input. Yet Vincent leaves such youngtimers out in the rain and prefers to put up the umbrella over a USB port for MP3 players. Regrettably high resolution downloads must stay out, because the data transfer is limited to 48 kilohertz by the downstream converter. As a consolation we spot a bi-wiring capable dual loudspeaker terminal, which can take both banana plugs and naked wire ends of any gauge.

The Vincent SV-237 offers its user even a USB input. Exemplary is the phase identification on the iEC mains socket, since the correct plug position in the power strip will reduce the level of the compensating currents which balance themselves out through signal carrying RCA cables. Another useful feature is the massive terminal because it allows clean bi-wiring.
​
Whether the Vincent can drive even critical loudspeakers was to be investigated in the listening test on the Isophon Vieta, highly acclaimed among experts. Two woofer chassis transferred into the interior – according to the bandpass principle – release their bass waves through a slot on the front face. Laterally mounted extra drivers contribute to an enhanced spatial imaging. The Vieta unfurls its full qualities on powerful, load stable amplifiers. And the Vincent was tailor-made for this purpose, as was demonstrated in the listening test. The most striking aspect of the interaction between Vincent and Vieta was a stoic calm in the sound image. 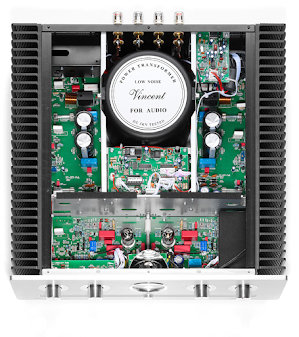 Rock-solid and three-dimensional: the SV-237 perceptibly nailed the players to their seats as they had been assigned by the sound engineers. Another fascinating aspect was the boisterous dynamics the Vincent was serving to translate every whatsoever small level change. Those were at least the first impressions of the classical check with the Faust Symphony, performed under Eliahu Inbal. With this CD recorded in 1992 the Denon label had opted for the so-called »One Point Recording«, a recording technology with no supports and only two omnidirectional microphones. Hence an assembly which captures instruments among themselves particularly well-balanced. For example, when in the last movement the final choir sets in with lines from Goethe’s Faust part two and the orchestra is widely swirling around the voices, the Vincent was tracing the room and stage almost visually, neatly separating the orchestra from the singers and conceivably buttressing the tenor with the reverb portions from the recording venue, the Berlin Schauspielhaus.

The SV-237 euphemised nothing, but embezzled not a bit of the fullness, the turbulent force and the frequency range of the orchestra, either. Every detail was clearly audible, and even in the biggest orchestra turmoil the overlaid organ did not go under.

Change of scene: »La Folia« is still regarded as the longtime referee in nearly all listening tests. The medieval dance music, played by the Atrium Musicae de Madrid, was also pressed on SACD under the Harmonia mundi label in 2003, and this one is now being sold for collector’s prices. Almost incredible how the Vincent was piecing together guitars, flutes, violins, upright basses, castanets, percussion instruments and voices into a melodic roundel with a fireworks of dynamics. The amp kept the complex sound themes perfectly apart, working out the individual character traits in a conceivable manner.

Who associates valve amplifiers with chimney fire and plush sofa, hence a cosy, warm and cuddly type of sound, will be taught better by the SV-237. It grasped so relentlessly and followed every lightning-quick change in tempo with practically no delay. Depending on the musical content, it was alternating between the roles of a biting feline predator or a hand-tame pussy cat.
For instance during the atmospherically dense live recording of the now 78-year-old Leonhard Cohen at the O2 arena in London. The Vincent managed to conjure up the concert complete with sparklers and the blaze of lighters galore into the living room. Cohen’s voice was so authentic, just like I had heard him at the open air concert at the Waldbühne in Berlin last year. With the emphatic slide guitar and the nasally-sweet sound of the saxophone, it was able to awaken the same goose bumps again like live in Berlin then. 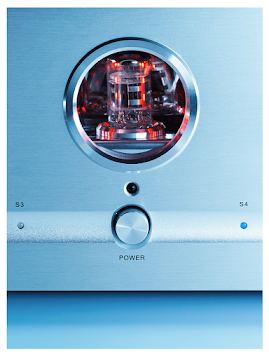 Chapeau! The SV-237 is the best amplifier in its price range and is awarded the reference medal by i-fidelity.net.

With its display window and the valve sitting enthroned behind it, the Vincent SV-237 suggests an atmospheric valve sound. Way off the mark! The German designer had intended to build a low-distortion integrated amplifier as true as a die. This he has achieved with one hundred percent success. The SV-237 is a wolf in a sheep’s clothing, sometimes clutching and biting, then again gentle and meek. With a nominal output power of 150 watts into 8 ohms per channel, as is documented in the specs sheet, it can mobilise unforeseen power reserves if need be. On the other hand it accomplishes the feat of unraveling a complex musical event into a palpable, airy polymorphism. The Vincent SV-237 is the only amplifier in its price range with nothing to complain about soundwise or with any loudspeakers. It unfolds an astonishing spaciousness, follows every howsoever small or big dynamic jump with no delay and shows off voices and natural instruments in an unaffected manner.   Hans-Ulrich Fessler